We are no strangers to the sport of roping, but there's a certain style that is quickly becoming a phenomenon in the western word. Breakaway Roping has been around for a long time, but in the past few years it has went off with a bang and has even made history.

Breakaway Roping is a type of calf roping that does not involve the calf being tied or thrown down. This event consists of one rider and their horse. A calf is maneuvered down into a chucte that has two gates that are spring loaded and swing open easily. The calf awaits its head start in the chute while the rider gets prepared. The rider backs their horse up into the box (holding box next to the chute) and once they are ready, all they have to do is nod and the calf is off running.

In front of the box, there is a spring loaded rope that is called the barrier. That barrier is released by the calf running. When the calf reaches a certain point, the barrier is set loose and the rider may advance. This allows the calf to get a head start. If the participant crosses that barrier before it is lifted, there is a penalty and 10 seconds will be added to your final time. It is so important for the rider to be patient and pay close attention to that barrier.

Once the calf releases the barrier, the horse starts running after the calf. The goal is to get the rope around the neck and the neck only. They are also racing the clock and trying to do this in a matter of seconds. When the rope gets around the neck, the rider must stop their horse quickly. The rope is attached to the saddle horn by a string that is intended to break when the horse stops. When the horse puts the breaks on, the calf is still running. Eventually, the calf runs out of rope and that string breaks off, allowing the calf to keep going freely. This concludes the contestants run. Another factor, is the bright colored flag at the end of the rope. This allows the person who is operating the timer, to see the exact moment the run ends. The rider who ropes the calf in the least amount of time wins.

Breakaway roping is seen a lot in High School Rodeos, College Rodeos, and it's even making its way into the pro circuits. It has made history at The American Rodeo and also Cheyenne Frontier Days Rodeo. This year was the first time breakaway roping was included at The Cheyenne Frontier Days Rodeo and Jordan Jo Fabrizio was the first lucky lady to take the champion title. This sport is fun and anyone can do it! It does take lots of practice and training for both horse and rider. You have to have a really good relationship with your horse and speed is essential in this event.

If you are looking to try something new or just pursuing your dreams, maybe give breakaway roping a shot! Remember to never be afraid to try something new. Always chase your ambitions and don't let anyone stop you. I mean, who knows, you just may be in The American Rodeo winner circle someday! Anything is possible! 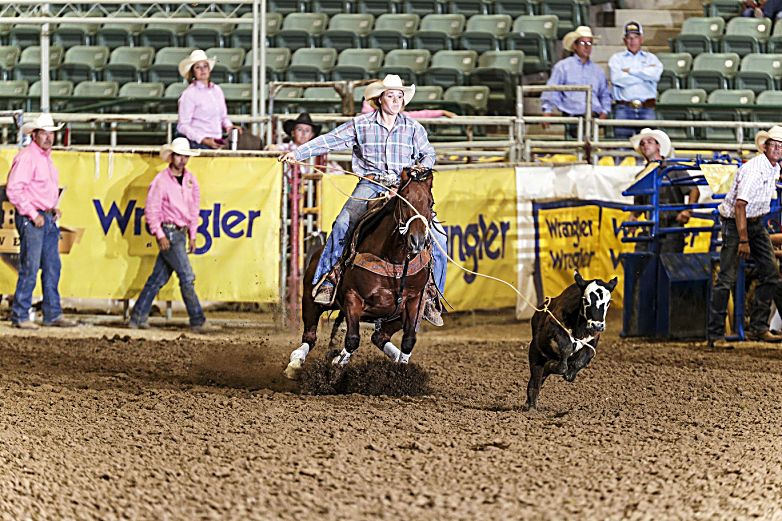