Frenchman's Guy is one of the most popular and successful sires of the decade. He has dominated the barrel racing world for years and his off spring are following in his hoof prints. Frenchman's Guy has won over $13 million in his career. His off springs has won a total of $2.85 million so far and they have set arena records everywhere. He is a packed with power and backs it up with his amazing personality. This horse is a legendary sire and his backstory on achieving this will give you chills.

Frenchman's Guy or otherwise known as Guy, was born in 1987. This gorgeous, well built Palomino, was sired by Sun Frost. His dam was a mare called Frenchman's Lady. Both of these horses had bloodlines from some of the greats including Lightning Bar, Doc Bar, and Casey's Ladylove. Guy has accomplished amazing things during his life. He was known as the leading all around performance horse sire in 2001-2017 and he was also the Future Fortunes 2015 leading sire. Guy is a proven competitor, has a proven pedigree, and is a proven professional arena horse. The highlights of his career include competing/winning in the barrel racing Futurity/Derby, running in PRCA events, WPRA events, and amateur rodeo circuits. Although he is absolutely stunning, he also has tremendous speed, stamina, a great mind, and an amazing heart. Frenchman's Guy was named the Future Fortunes Stallion of the Year in 2019 and he has been named one of the best investments in the performance horse industry.

As a weanling, Guy was purchased by a couple named Bill and Deb Myers from South Dakota. He was the last colt by Sunfrost and the family paid $2500 for the palomino. The Myers had already owned 3 of his siblings and knew he was worth every penny. During this time, the Myers owned their own ranch, where they made a living by training horses. They were not extremely wealthy, but they were driven by pure passion. They took a chance on buying this colt and they had no idea it would take them as far as it did. Their ranch has more than a 20 year legacy of breeding fast, cowy horses, who also dominated in the barrel racing industry. Their journey with Guy started out rocky, but in the end it was just fate working its magic.

The Myers lived and breathed horses. The whole family worked on the ranch, including the children. One day, when their son was out doing chores, a financial disaster hit. It turns out Frenchman's Guy was spooky as a baby. While the son was cleaning out his pen, he spooked and tried jumping over a wheel barrow. They Myer's son put his pitch fork up to try and stop the young horse and Guy ended up jumping into it. This incident caused him to loose his right eye. It was a tough time for the family. There was so much riding on this little horse and the worst had just happened. As we all know, vet bills can get very expensive. After spending lots of money to fix Guy, the family turned him out to pasture. They were so distraught that they left him turned out for 2 years. Once 2 years had passed, the family brought him back to the ranch and re-evaluated. To their surprise, he was very trainable. Once he figured out that they were not going to hurt him, he trusted them tremendously. Here is where fate stepped in. If Guy had not have lost his eye, they would have gelded him and made him into a ranch gelding. It was an unfortunate event, but it allowed for an amazing turn of events. They decided with one eye, they would keep him a stallion and use him for breeding and riding.

With more training, the family discovered that Frenchman's Guy was light sided, easy to handle, level headed, and responsive. Despite having one eye, he also carried his head straight. Deb Myers began training him for barrel racing and then ran him in The Futurities as a 5 year old. Having one eye did not slow this horse down. He dominated those barrels and quickly had the industry in an uproar. Deb rode him perfectly and the two of them were on fire. She won money at the barrel futurities, they qualified for the PRCA Finals Badlands Circuit and the South Dakota Rodeo Association, and he also won Reserve Champion at the Northwest Rodeo Cowboys Association. He quickly rose to the top and was being considered the elite barrel horse.

At age 4, Frenchman's Guy started breeding mares. The Myers could not afford to be picky with the mares so they bred him to pretty much anything. His starting stud fee was $300. His first crop of foals came out really good considering the choice in mares. They were not perfect, but still really nice babies. The more Deb competed on the horse, the more popular he got. He caught a professional barrel racer's eye at an event. Kristie Peterson has had an outstanding barrel racing career. At this time, she rode a horse she called Bozo. Bozo was a 3 quarter sibling to Guy. Kristie took a liking to Guy and she became close with the Myers. They worked out a deal to promote Frenchman's Guy breedings. In exchange for them using Bozo's name on Guy's stud flyer, they gave Kristie a free breeding every year. There became a huge demand for Guy's offspring very quickly and Peterson became a champion for Frenchman's Guy bred horses.

With the increased interest in breeding to Guy, they started crossing him with race bred mares to boost him as a sire. It has been said that you could cross Guy with anything and still have an outstanding foal. Using race mares, gave the babies more speed, but Guy always put his stamp on them. They all seemed to have his athleticism and smart mind. It's amazing to see the numbers of offspring that Guy has produced over the years.

Not only is the horse a legend, but so is Myers Ranch. They continue to produce amazing performance horses and Guy still lives their with the family. He still stands as a stallion and his 2020 stud fee is $6,000.00. Myers also kept a son out of Frenchman's Guy and he stands as a stud at their ranch also. The family so loved Guy, that they decided to clone him. In 2011, 3 Guy clones were born on the ranch. All 3 beautiful palominos.

Frenchman's Guy will forever be known as the number 1 barrel racing sire. His off spring continue to win around the world and in my opinion he is one of the greatest stallions to walk this earth. His story is so heart warming and it was fate that brought him to where he is now. The Myer's family have said that they owe everything to Guy. They took a chance on him in 1987 and look where they are now. If you are looking for your next barrel racing prospect or even an all around champion, check out these miraculous horses.

If you would like to read more about The Myer Ranch and Frenchman's Guy, check out their website below! 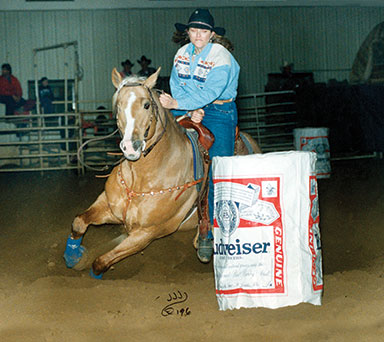